The Folklore of Discworld 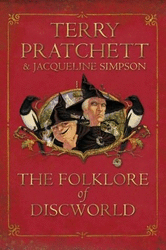 At the latest book fair, I found The Folklore of Discworld by Terry Pratchett and Jacqueline Simpson in a beautiful hardback edition sold off for a ridiculously low price. It is written like an encyclopedia, and discusses (nearly) every parallels between folklores of Discworld and Earth: gods, dwarfs, elves, trolls, witches, heroes, Death, …

One would never suspect that “[strong patterns] go drifting off across the multiverse as particle of inspiration, which leads to some truly amazing similarities between Earth and Discworld1.” But it is obvious that particles did drift, and it is amazing how many references to earthly folklore Pratchett introduced in his Discworld novels. Maybe this is because odd things happened to him? Who ever heard about a ring going back to its owner? Nonsense!

An odd thing happened to Terry once. He bought a ring in a small shop in Pike Place Market, Seattle. It was slightly over-sized and he soon lost it, and couldn't find it anywhere. A year later he was back in the city, went to the same shop to buy a replacement, and in reaching into his jacket pocket (a jacket which, of course, he'd worn many times during the year) for some loose change, he put a finger through the very same ring. How could it have been otherwise? Rings try to find their way back to their owner. Someone ought to write a book about it2.