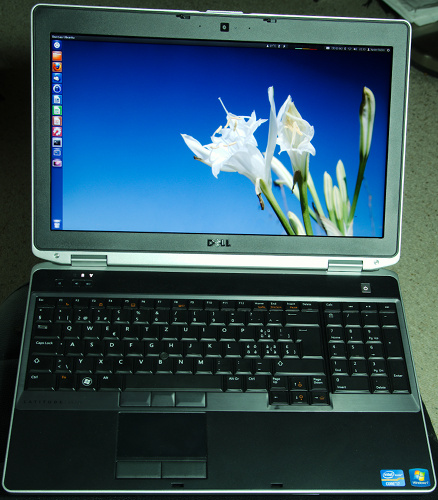 The keyboard has a numeric pad. Not sure it will be really useful (I rarely use it). The effect is to shift the useful keys a bit to the left. Not so comfortable, but it is not too bad and I am already getting used to it.

As expected from Dell, the laptop is well built and looks robust. It is fast and rather silent, though a bit expensive. It tends to heat a bit, especially on the left side with the fan. It may not be optimal for those who intend to work with it on their lap…

The laptop comes with Windows 7 pre-installed. I installed Ubuntu Precise Pangolin in dual boot, from a USB stick. The process was globally successful, even though a few things still doesn't work. Let's go through what I discovered during this process.

This post is not a tutorial. It is only a set of notes, aimed at people who know how to use and install Linux.

You perform the following operations at your own risk. I decline any responsibility for all damage, loss of data or anything else (including, but not limited to, the burning of your computer, house or town, the death of a cat, yourself or any one else, the destruction of the Earth or the universe, etc.) that could result directly, indirectly, or in any other way, from performing the following operations. You are warned!

Optimus is a wonderful idea… on the paper! Very shortly: some Intel Cores come with an integrated graphic chip (in this case it is an Intel HD Graphics 4000). The additional nVidia card comes with a system called Optimus which will enable the nVidia card only when the most demanding applications are running. The rest of the time, the nVidia card is disabled to save power. The Intel chip is sufficient for most applications, and certainly for all compiz effects.

But unfortunately nVidia does not provide a Linux driver for Optimus. . To make use of optimus, you need to install Bumblebee to enable/disable it on demand. Basically it will run on the Intel chip and start the nVidia card only when you run the optirun command.

Until now it all looks fine. The only problem is that this setup (with or without bumblebee) causes random kernel freezes. It even happened me once during the install process (luckily not during partitioning, but I guess that could happen and wipe your hard drive). Apparently it is a known bug of the video driver. Until a fix is available, the solution I found is dramatic: disable optimus altogether and use only the nVidia card . To avoid potentially destructive crashes during the install process (what if it occurs during the partitionning?) I recommend disabling optimus as the very first step. You can always enable it later and run your own tests with a later kernel that may have fixed this issue.

So before you start the install, during the boot, press F12 to get the boot menu. Choose BIOS Setup, then Video > Optimus, uncheck the box and exit. Plug the USB stick and power on. It is probably a safe idea to install the proprietary drivers (nvidia-current package), unless you want to remain absolutely free.

There was some confusion previously regarding the effect of disabling Optimus. In some older BIOS revisions (probably until A04 or A05) it would disable the Nvidia card and let only the Intel Graphics run. Now (BIOS A07), the Nvidia card is enabled when Optimus is disabled. Nvidia-current drivers are working. This behavior may change with a future BIOS revision, I have no idea.

Booting on the USB stick

The E6530 won't boot from a plugged USB stick automatically. I selected the boot device manually.

Plug the USB stick. Power on. Press F12 to get the boot menu. The USB Storage Device was not working so I selected the UEFI Generic Flash Disk.

The E6530 comes with 3 partitions on the hard drive:

First step: to shrink the Windows partition (I kept 50GiB). It is normally recommended to perform that operation from Windows directly. However I found that I could free only a few GiB, so I did it from gparted in the live Linux.

Then I secured a small partition for the Linux system, a bit of swap (as much as the RAM plus a bit for safety), and all the rest as a shared partition so the data is available both in Linux and Windows.

Do not try to use your big data partition directly for /home. I tried it, and it was a complete failure! The problem is that NTFS doesn't have file permissions. So either all or none of the files are executable. They all have the same owner/group. We will change the default permissions later, but it is not enough and some applications (for instance PulseAudio and Dropbox) won't work correctly.

I expected to get a Grub menu where I could choose my system. But for some unknown reason I booted in Windows. After some time, I figured out I had to forget about Grub and configure Windows' bootloader instead.

I downloaded and installed EasyBCD (non-commercial) and set it up as instructed (see also this more detailed procedure).

At this point, I can boot on linux, but grub was broken and showed a (rather unfriendly) command line.

After a good old Ctrl+Alt+Del, I read boot-restore, rebooted from the USB stick, did as instructed, checked a few thinks that made sense on the moment (sorry, didn't note what exactly, all I remember is I didn't restore MBR).

As we make our choice of OS with Windows bootloader, it is useless to make it again with grub.

So I edited /etc/default/grub and added the following line:

Change the default permissions for /mnt/data

By default the NTFS drives are mounted with files owned by root:plugdev (user:group) with write permissions to the group. As the first user is a member of the plugdev group he can write on it. For some reason (that turned out totally useless) I wanted to tweak that to own the files. You can probably disregard the next step.

Now I have a big partition where I can write all my data. But I don't want to go to /mnt/data each time. So I created symbolic links that pointed the most important directories in my home to /mnt/data.

… and so on. Just repeat this procedure each time a folder grows a bit. You can do the same kind of things in Windows, as explained by Lifehacker.

Overall this laptop works really fine. Dell clearly made a laptop that is compatible with Linux. Most issues I described here are in fact dual-boot issues, not Linux issues.

What works out of the box:

What can be fixed:

What I couldn't fix yet (by order of importance):

Edit on 2012-08-02: apparently once optimus is disabled only the Intel Ivybridge graphics is active, not the nVidia. At least I failed having the nvidia driver operating properly.

Edit on 2012-10-13: added the patch for the touchpad, and it is possible to change the backlight time. Thanks Flix for the pointers.